Deshaun Watson Wants Out, J. J. Watt is Out, the Beginning of a New Era in Houston 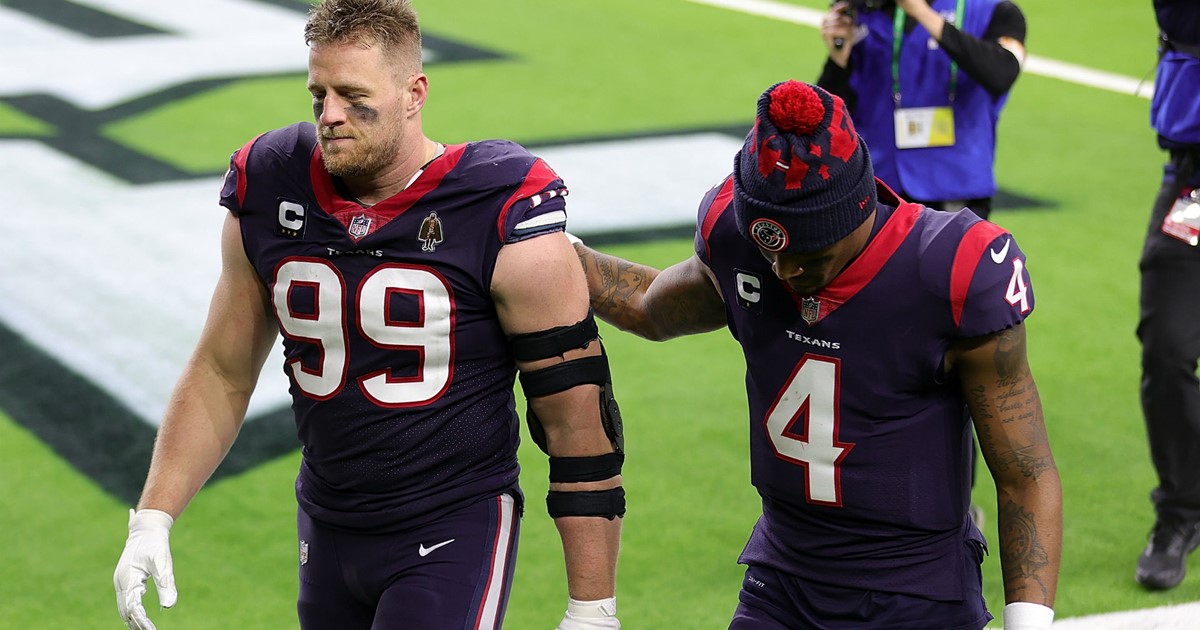 January 12, 2020, the Houston Texans are dominating the Kansas City Chiefs in Arrowhead Stadium 24-0 in the first half as Houston looks to reach the AFC Championship for the first time in franchise history. Instead, the Texans would give up 41 unanswered points on six straight touchdown drives by Kansas City in a 31-51 meltdown. What seemed to be Houston’s highest moment came crashing down as quickly as it rose. Between 2015 and 2019, Houston reached the playoffs four times in five years, winning the AFC South title four times in that stretch. The Texans had one of the best receivers in the entire NFL in DeAndre Hopkins, a rising superstar Quarterback in Deshaun Watson, and a three-time Defensive Player of the Year winner in J. J. Watt. The trio of superstars would only last three seasons together.

During the 2019 offseason, Houston’s head coach Bill O’Brien dealt superstar wideout DeAndre Hopkins after a dispute with players during the season. The Hopkins trade seemed like they were giving away their All-Pro for hardly anything in return, undervaluing his talent. This raised a lot of controversy across the league by players and fans alike, as Hopkins became the first of the three superstars to escape the nightmare that would arise in Houston.

The 2020 season was an abysmal one for the Houston Texans after starting the season 0-4, Houston’s front office canned Bill O’Brien. Unfortunately for the Texans, the failure continued as Houston would fall to 4-12 for the season missing the playoffs for the first time since 2017. After the Texans’ final game of the season, a video was captured of J. J. Watt apologized to Deshaun Watson saying, “I’m sorry. We wasted one of your years. I mean, we should have 11 wins.” That statement would stand out for many reasons, Watt was right the Texans on paper are a far greater team than 4-12 maybe not 11-5, regardless of at least an 8-8 team. Watt was also right in saying they wasted one of his years, Watson is absolutely in his prime and deserves better than getting his best receiver traded for nearly nothing. Despite not having Hopkins, Watson still passed for a league-high 4,823 passing yards, with career highs in passing touchdowns, passing rating, and fewest interceptions. Watson is an elite Quarterback while having an unhealthy Will Fuller and an aging Randall Cobb to pair with Brandin Cooks.

Unfortunately for the Texans, this would spark the desire in Watson for a departure. In January Watson spoke out asking to be traded, leaving Houston with two desired teams, one being the New York Jets and the other being the Miami Dolphins. The Texans were asking for 2 first-round picks, 2 second-round picks, and at least 2 young defensive starters. As weeks would unfold without a deal being struck, the Texans came out saying that they are not trading their Quarterback. Soon after, the three-time Defensive Player of the Year winner J. J. Watt asked for a release from the Texans after playing in Houston for 10 years. The Texans would honor his request and release Watt on February 12, 2020, as the superstar was a hero in the Houston community on and off the field. Especially during hurricane Harvey relief back in 2017, raising $41.6 million dollars for families and communities earning Watt the Walter Payton Man of the Year award in 2017 for his efforts.

Here are notable players in recent history to leave the Texans. The Houston Texans’ 11th pick from the 2011 NFL Draft J. J. Watt would be a five-time All-Pro, five-time Pro Bowler and three-time DPOY winner would be released in 2021. First-round draft choice from the 2013 NFL Draft DeAndre Hopkins would become a three-time All-Pro, four-time Pro Bowler, and be a member of the 2013 All-Rookie Team as a member of the Texans and would be traded away after 7 seasons in Houston. Jadeveon Clowney, a former first overall pick from the 2014 NFL Draft, became a three-time Pro Bowler as a Texan and would be traded in 2019 to the Seahawks after 5 seasons in Houston. In the past three seasons the Texans have given up three superstars, and Deshaun Watson wants out. It is a new era in Houston, buckle up Texans fans.

How to Start a New Business as a Veteran